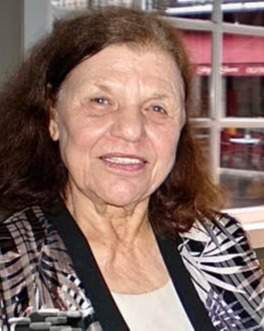 Vasiliki “Kiki” Demosthenous, 95, of Kingston, NY, passed away peacefully on September 11th, 2022, surrounded by family. She will be remembered for her deep love for her family, her fierce independence and her appreciation of a good laugh.

Born on February 10, 1927 in Psari, Greece to Athanasia and Demetreos Pavlopoulou, Kiki was the youngest of 11 children. After her mom passed away when Kiki was only two years old, she was raised by her father, a Greek Orthodox priest of 53 years.

As a young woman she left Greece to join her sister, Mary Makris, in the United States. While Kiki was living in Catskill, NY, she met her husband of 61 years, George Demosthenous. Kiki and George were married on June 20, 1954 and remained devoted to one another until the time of his death in April 2015. After marrying, the couple moved to the Kingston - New Paltz area, a place they called home for the remainder of their lives. They spent the first 25 years of their marriage in Kingston, NY, where they raised their 3 sons: Denni, Deno and Jimmy.

Kiki and George eventually moved to New Paltz to be closer to George’s business, the Plaza Diner. They lived there for over two decades and loved entertaining friends and family in their home. There was always room at Kiki’s table for anyone who wanted to stop over to share a glass of wine and a home cooked meal. Those who went had the pleasure of enjoying Kiki’s famous avgolemono (Greek lemon) soup; she ensured the recipe lives on by taking every opportunity she could to teach it to her grandchildren.

In 1984, Kiki, George and the boys opened the Hillside Manor Restaurant in Kingston. Originally a small restaurant, the family oversaw its expansion into a well-known wedding and reception venue which they owned until 2014. Kiki was the backbone of the restaurant, often helping in the kitchen until well after all guests had left.

Undoubtedly, Kiki’s greatest joy in life was her family, especially her grandchildren - who always gave her cause for a big smile and who fondly called her YiaYia. She is survived by her sons, Denni Demosthenes (Joan), Deno Demosthenes, and James Demosthenes (Annie); her seven grandchildren, George, Peter, Georgia, Vasos, Christina, Evangelia and Elisabeth; and her beloved nephew, George Makris.

A celebration of Kiki's life will be held at St. George Greek Orthodox Church, 294 Greenkill Ave, Kingston, NY 12401, on Thursday, September 15th. Visitation is from 10am - 11am, with the funeral immediately after.  Burial will follow in Montrepose Cemetery, Kingston.

Services entrusted to the care of Keyser Funeral & Cremation Service.  A tribute for Kiki can be found at www.KeyserFuneralService.com where you may leave memories and expressions of sympathy for her family.

To order memorial trees or send flowers to the family in memory of Vasiliki "Kiki" Demosthenous, please visit our flower store.