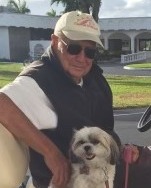 Richard (Dick) Grant Spoth, 84, of Hallandale, FL, passed away Saturday, September 24, 2022 at Memorial Healthcare System in Hollywood, FL. Born on January 11, 1938 in Manhattan, NY, Dick was the youngest son of the late Joseph Thomas, and Naomi (Carter) Spoth. In addition to his parents, Dick was predeceased by his brother Joseph Carter Spoth of Houston, TX and his sister Naomi Van Steenburgh of Poughkeepsie, NY.

Dick was beloved by his family and is survived by his wife, Carol Spoth of Ulster Park, NY and their three children: Richard G. Spoth Jr. of NY, Deborah J. Spoth of FL and Dr. Brent A Spoth of NC; two grandchildren: Meghan Spoth of ME and Matthew Spoth of NY; one great grand-child, Arya Spoth and numerous nieces and nephews.

Dick began his career with IBM and graduated from the University of Kentucky in 1956 while at IBM. He married his high school sweetheart, Carol Elizabeth Lawrence on July 12, 1958. Dick remained at IBM for over 30 years where his successful career led them from New York to Kentucky where their children were born. After being transferred back to New York, Dick and his family settled in Ulster Park where they lived for approximately 47 years.

In 2001 Dick and Carol bought a retirement home in Florida and they enjoyed spending winters there while remaining in New York during the summer. Dick had a passion for baseball. He was a pitcher for his team at Kingston High School and coached his sons in Little League. He loved the New York Yankees and was an avid fan throughout his life. He was also a big fan of NCAA Basketball, especially the Kentucky Wildcats.

A tribute for Richard can be found at www.KeyserFuneralService.com, where you may leave memories and expressions of sympathy for his family.

To order memorial trees or send flowers to the family in memory of Richard Grant Spoth, please visit our flower store.