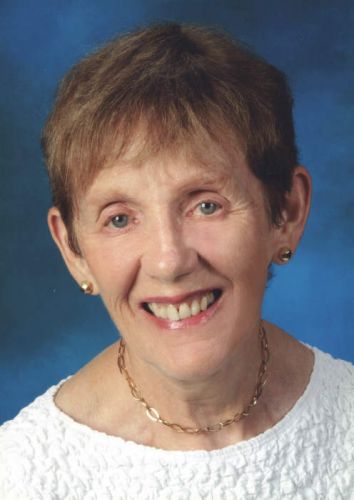 Patricia Elizabeth O’Reilly Murphy died November 20, 2017 at Thompson House in Rhinebeck, New York. She was born in 1937 in Kingston, the second of seven children born to William J. and Gertrude (Falvey) O’Reilly.  She was married for 52 years to John T. Murphy, who preceded her in death in 2013.

Pat was a graduate of The Academy of St. Ursula, Rosemont College and the College of St. Rose.  She was an accomplished writer and editor. Her most recent work, Kingston, New York, is part of Arcadia Publishing’s Historic Postcard Series.  She was a treasure trove of local and state history.  Kingston’s Stockade Area and her beloved Rondout would come alive when Pat conducted walking tours. One of her favorite projects was the script she wrote for a DVD, George Clinton: Founding Father of New York State, produced by Friends of Historic Kingston, on whose board she served six terms, one as President. In 2010, she initiated “Kingston Clean Sweep” which is now an annual event sponsored by FHK. Until her illness made it impossible to continue, she served as a trustee of the Kingston City Library, on the Heritage Area Commission, the Comprehensive Plan Committee and its zoning subcommittee.

After John’s retirement, she, John and friend Carol Clement established High Land Flings Hiking Holidays.  Hikers from all over the country joined them for memorable weekends spent trekking through the Catskills, Shawangunks and Berkshires. The company’s “Hudson River Artists’ Landscapes Tour” was featured in the New York Times Travel Section and on CNN Travel. Pat and Carol, wanting to share the beauty of our valley with everyone, came up with a plan to link its many sights and adventures. This plan became the Hudson River Valley Ramble, which has grown to encompass activities every fall from NYC to Albany and completed its 18th year in September.

Besides her husband, Pat was predeceased by two brothers, William and John O’Reilly, and two sisters, Terry Godwin and Marree Paulson.  She leaves behind her children, Maura Murphy of New York City and Patrick Murphy and his wife, Amy (Wolk), of Hyde Park, Vermont, and their children, Gavin and Lily, who will greatly miss “Grandma Pat”.  Also surviving are a sister, Mary Troy and her husband, Bill, of Goshen, NY, a brother, Timothy O’Reilly and his wife, Denise, of Wellesley, MA., and a sister-in-law Mary Jo Revitte of Bayfield, Colorado, as well as many loving nieces, nephews and cousins.

Contributions in Pat’s honor may be sent to Friends of Historic Kingston, PO Box 3763, Kingston, NY 12401. To leave an expression of sympathy, please visit www.CarrFH.com

To order memorial trees or send flowers to the family in memory of Patricia E. Murphy, please visit our flower store.