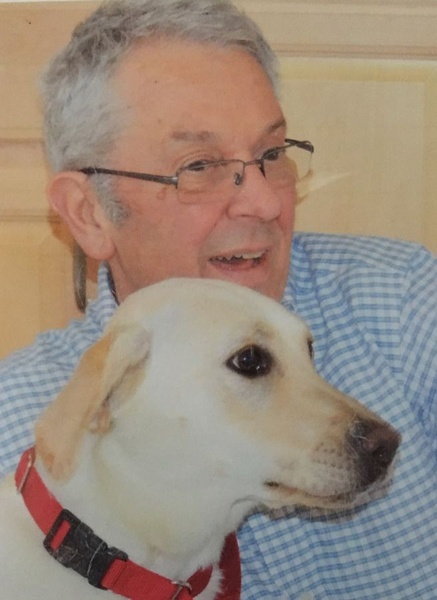 Palmer Leroy Kocher of West Hurley, 77, passed away peacefully with his dog, Sandy, by his side on Monday, December 28 in Haddonfield, New Jersey.

He had been there doing what he loved most, spending time with his family.

Asked several years ago how he wanted to be remembered, Palmer said simply that he hoped he'd be remembered as a good father, and answered humbly that folks might think "that Palmer Kocher, he was all right."

He was more than all right, he was the best.

Palmer was born to Ruth & Albert Kocher in New Cumberland, Pennsylvania on December 28, 1943, joining his older sister, Shirley Cole. 9-years his senior, Shirley still resides outside of Harrisburg today. Affectionately known as "Butch" in his early years, on his first day of school his mom wrote his real name on his hand.

He met his future wife, Linda Ann Weigel, on the Cedar Cliff High School band bus. They would marry on the hottest day of the year, Sunday, June 11, 1967 and start a family soon after. They welcomed Christopher William, Jeffrey Robert, Michael Scott and Gillian Elizabeth in the years that were to come.

For more than 50 years, Palmer spent his work days at IBM before heading home to be a part of the litany of activities the children would be involved in. From Hurley Little League, to Hurley Woods soccer and the Boy Scouts Troop 166, he was always dedicated to his children and their pursuits. When his youngest son, Mike, was in college he and Linda would spend their weekends traveling hundreds of miles to see his baseball games.

One summer, home from college, Palmer's son Jeff expressed interest in joining the West Hurley Fire Department. This was a transformative moment in Palmer's life, as both he and Linda joined together. With Palmer driving the ambulance and Linda attending to those in need as an EMT, they would touch countless lives. After Linda's passing in 2010, Palmer continued his work with the fire department, serving as a Commissioner, and as recently as Thanksgiving Day, responding to a call.

In addition to his passion for the fire department, he took great pride in his therapy dog, Sandy. The duo brought comfort to those impacted by crisis both locally and nationally, and visited Albany International Airport weekly to greet passengers coming and going. He also launched a second career later in life as an adjunct professor at SUNY New Paltz teaching math. He enjoyed this job immensely, and was committed to never retiring from it, a promise that he fulfilled.

We would do it over again.

Palmer was known under many names, starting with Butch and extending to Husband, Dad, Pops, Paul, Big Bopper, Pa, Grandpa and many more, and while the names and ways we remember him will be unique to everyone he knew, they will all be surrounded with so much love.

From all of your children, we are because you were, and we will love you forever.

In lieu of flowers, the family is asking donations be made in Palmer's memory to the West Hurley Fire Department or The Good Dog Foundation in Hudson, New York ( https://thegooddogfoundation.org/ ).

Due to COVID-19, funeral services will be private. The family is inviting those who loved Palmer to a drive by memorial at the West Hurley Fire Department on Tuesday, January 5 at 6pm.

A Celebration of Life is planned for Saturday, June 12 at the West Hurley Fire Department.

To order memorial trees or send flowers to the family in memory of Palmer L. Kocher, please visit our flower store.