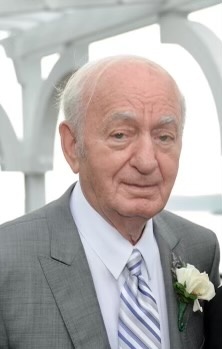 Obituaries can be cut and dry. Nikolaos Lentzos's life was anything but that. He was born in 1935 the small village of Myles outside of Olympia in the southern part of Greece. Even though life was difficult he formed a strong bond with his siblings Hariklia, Jimmy, John and Bill. He used to tell stories of Nazi's occupying his village at the end of WWII and how they handed candies, a treat, to the children. As he got older, his brothers left to find a better life in places all over the world. They returned to bring him with them and they left their sister behind in the family home with their parents. He first settled in Athens (he even played tennis semi-professionally). Then he and his brother Bill then travelled to Australia, but they did not decide to make it their home. His brothers Jimmy and John had settled in Canada and then, with one long boat ride, he landed in northern Canada in the Yukon Territories. He did not speak any language but his native Greek, yet he found work on railroad lines, dishwasher in kitchens and eventually opened his own restaurant with his brothers. He used to tell stores of crazy chefs that sang opera in the kitchens, catching Salmon in the streams (this led to a conversation with an unhappy Canadian Mountie and the fact that fishing salmon needed a license) and charming Nat King Cole into having him sing "Unforgettable" as a waiter in a catering hall. Eventually he and his brothers opened their own restaurants named Lentzos in Canada. He returned to Greece to look for someone to share his life with. My Aunt Nula (his brother John's wife) introduced him to a young lady from the village of Velvendo. That young lady was Elizabeth Tzurali. He knew she was the one and they returned to Canada and were married. Shortly after they moved to America and settled in Plattsburgh New York where they opened one of the largest restaurants with his brother Bill and wife Toula in the city, also named Lentzos Family Restaurant. This became the corner stone of the city and generations brought their families to eat there. In 1978 the had their first child Georgia and in 1980 their second child Panagiotis was born. Both named after his own father and mother. In 1987 they closed the doors of Lentzos and the family was moved to New Jersey where he and his brother Bill opened Spaghettata an Italian Restaurant and his brothers Jimmy and John ran Lentzos Seafare a high class seafood establishment. He spent a decade in New Jersey and they were incredibly successful. Their Italian restaurant became a favorite of even celebrities including Eddie Murphy & Dizzy Gillespe. Wherever he went, customers came for the food but stayed to share a story with him and the widow where he and Bill made the pizzas was always filled with customers who stopped by to talk to him. In 1997, when he brothers all moved on to their retirement plans, he yet again reinvented himself. He moved to Kingston New Yorkwhere he opened Sunrise Bagels and made the store legendarily. It wasn't long before people would travel to Sunrise to get bagels and customers even had them shipped all over the country. They came in for the bagels, but many came back to see Nick and Liz and take a moment to share a humorous conversation. In 2013, Nick became a grandfather when Georgia gave birth to Alexander. He waited for a grandchild and was excited for a boy. In 2015, he got another grandson Leonidas. In 2016, Nick and Liz sold Sunrise and began their retirement. Nick found happiness in his antiquing hobby and was excited to open his Antique store Nick's Knacks. Mostly, he just wanted to have a place people could come to and share a conversation with him. Nick lived a very exciting life. Amongst the mentioned stories he managed a rock band, had horses, knew politicians, collected antiques and made countless people happy. He had an amazing sense of humor, was infinitely kind and incredibly determined. He always cared about how he looked and had an eye for fashion. He loved his family and friends and talked about one day seeing his mother and father again in heaven. He always lit up when his grandchildren were around and waited for a hug from them. Nick passed away peacefully August 5, 2021 at 11:30 pm with his wife Elizabeth and Sister-in-law Tula by his side. He lived more than a dozen lives in the time most live one. He was loved by his family, friends and countless others lives he touched. He will be remembered for his stories and his sense of humor. He will live on in the hearts of the family he left behind. We are comforted to know he is with his family in heaven and most certainly he is entertaining them all with a story or two.

He is survived by his wife Elizabeth, children Georgia and Panagiotis, grandchildren Alexander and Leonidas, son-in-law Steven Scott, Sister-in-law Demetria (Tula) Lentzos, Niece Georgia Lehoszky, her husband Victor Lehoszky, their children Victoria, Niko (his namesake) and Kayla. He is also survived by his first cousin William Lentzos and his wife Maria who live in Canada.

Arrangements entrusted to Keyser Funeral & Cremation Service, 326 Albany Ave., Kingston, NY 12401, where family and friends may visit on Wednesday, August 11, 2021 from 4pm to 8pm. The funeral service will be held at 11am on Thursday, August 12, 2021 at St. George Greek Orthodox Church, 294 Greenkill Ave., Kingston, NY 12401. Burial will follow in Montrepose Cemetery, Kingston.

In lieu of flowers, donations may be made to St. George Greek Orthodox Church, 294 Greenkill Ave, Kingston, NY 12401. A tribute for Niko can be found at www.KeyserFuneralService.com , where you may leave memories and expressions of sympathy for his family.

To order memorial trees or send flowers to the family in memory of Nikolaos P. Lentzos, please visit our flower store.