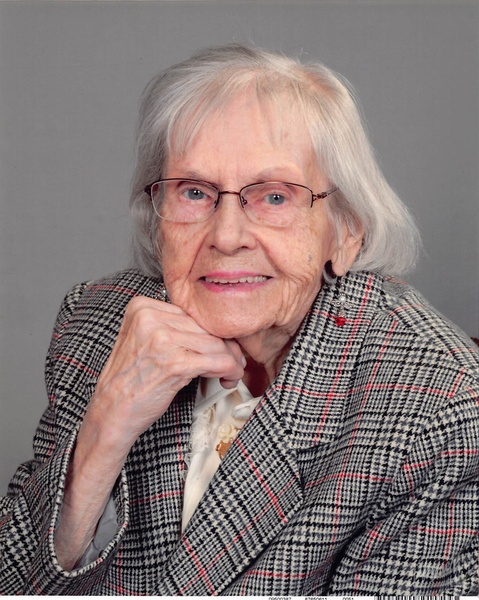 Muriel Adelyn Ausanio, 101, of Kingston, NY entered into eternal rest on Tuesday, July 26, 2022, at the Lutheran Care Center. Muriel was born in Kingston, NY on April 12, 1921. She was the daughter of Edward and Adeline Kellerman Snyder.

She attended Kingston High School and continued her education at the University of California at Los Angeles (UCLA). After graduating college with a degree in Elementary Education she began her career as an educator in El Centro, CA. After volunteering with the Red Cross in California, during World War II, she returned to Kingston and on March 23, 1945, Muriel married Gennaro (Jerry) Ausanio, and raised three sons, Justin Sr., Jerry and James. In 1958, she continued her career as a teacher in the Kingston City School system, retiring in 1983.

She was a lifelong member of the Trinity Lutheran Church, where she was baptized in 1921. Throughout the years of her devoted service to the church she participated in several activities. She served as president of the Women’s Guild and her other activities included being a member of the Alter Guild and conducted the Junior Chime Choir. She also participated in several other organizations, which included the Salty Seniors in Lake Katrine and the Warm Up America. Additionally, she was a member of a social group known as the “Busy Bees,” which knitted articles of clothing for military personnel who were serving overseas and local nursing homes.

She was predeceased by her husband Gennaro (Jerry) Ausanio, her oldest son Justin Sr. of Lake Worth, FL and her grandson Jerry Antony of Largo, FL. She is survived by two sons, Jerry and wife Holly of Clearwater, FL and James and wife Marie of Hopewell Junction, NY. Five grandchildren Justin Jr., Jared, Tina, Jimmy and Anna and two great grandchildren Parker and Mara, who she adored. Muriel also had several nieces and nephews, which include Donna Ausanio, who provided care and comfort to her when she resided in Kingston.

The Ausanio family would like to express their deepest gratitude and appreciation to the Lutheran Care Center of Poughkeepsie for their kind and compassionate care they gave to her while she was a resident.

Arrangements entrusted to Keyser Funeral & Cremation Service, Inc., 326 Albany Avenue, Kingston, NY 12401, where family and friends may gather on Tuesday, August 9th, 2022 from 4pm-7pm. The service will be Wednesday August 10th, 2022 at 11am at Trinity Lutheran Church. Burial will follow at the St. Mary’s Cemetery. A tribute for Muriel may be found at www.KeyserFuneralService.com, where you may leave memories and expressions of sympathy for her family. For those who wish, contributions in Muriel’s memory may be made to Trinity Lutheran Food Pantry, 72 Spring St., Kingston, NY. 12401.

To order memorial trees or send flowers to the family in memory of Muriel Adelyn Ausanio, please visit our flower store.