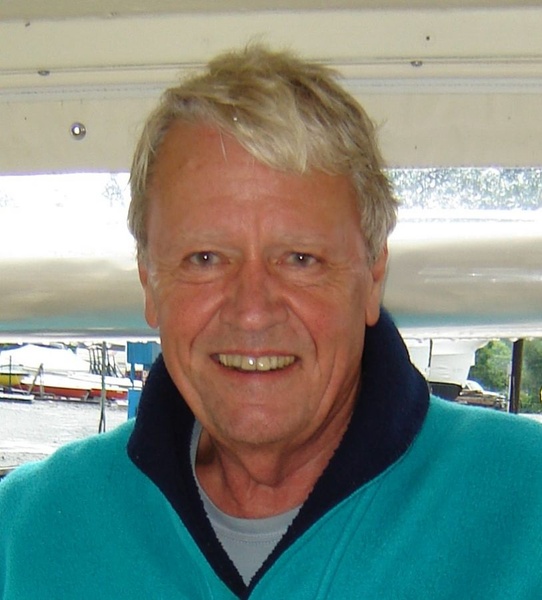 John Tilton Melby, age 77, passed away December 29, 2020 from Lewy Body Dementia. John navigated this disease with inspiring courage, grace and dignity. That was John. John was born December 23, 1943 to Jean (Tilton) and Stanley H. Melby. John spent the majority of his youth in Weston, MA before joining the U.S. Air Force in 1962. He graduated from Boston University in 1969. John's entire career was in various capacities within the insurance industry. The majority of his career was with The Daniels Agency and Rose & Kiernan in The Hudson Valley. John loved boating and did extensive cruising from Lake Champlain to Newport, RI. He never had a bad day on his boat, even if he was in the bilge! He loved sharing his boat with family and friends. He was a snowmobile enthusiast, enjoying over 25 years of the sport in The Adirondacks and Canada. He traveled throughout the U.S., most recently RVing, as well as taking several trips to Europe. All these journeys entailed a video camera in tow! All those who knew John, knew him to be a man of incredible integrity. He had a big heart, was always the first to help someone in need and never doubted doing the right thing. John truly believed, "To whom much is given, much will be required." He donated time and monetarily to many causes. Most importantly he would see a need to help someone who, for no fault of their own, had fallen on hard times, doubted how their path would ever succeed and just needed someone to believe in them. John would give them a bit of help (buy a non-covered prescription, put new tires on their car to keep them and their family safe, etc.) and encourage them to keep on their course and help someone else in need when and if they were able. As one friend said, "The world needs more John Melbys!" He is survived by his wife of 45 years, Judi Melby, his sons David (Lynn), Jeffrey (Caroline) and grandchildren Andrew, Matthew, Ryan, Harrison, Charlotte and Windsor Melby and Kayleigh and Danielle Kohnke. He is also survived by his brothers, Stephen (Beverly) and Dean Melby. His brother, David (Leslie) passed away February 3, 2021. He was pre-deceased by his first wife, Nancy (Newbert) and his parents. In hopes of continuing John's "pay it forward" attitude and making a direct impact when helping others, his family is requesting donations be made in John's memory to the Charity Care Fund at Hudson Valley Hospice, 80 Washington St., Suite 204, Poughkeepsie, NY 12601 or online at www.hvhospice.org . Donations made in John's memory will specifically finance medically related in-home care for those nearing end of life, where this need is not covered by health insurance or other agency programs. Please clearly indicate that your donation is in memory of John T. Melby to insure it is properly designated. A pledge has been made to match all donations. When the world "opens up" a gathering will be held to honor John's incredible life.

To order memorial trees or send flowers to the family in memory of John Tilton Melby, please visit our flower store.