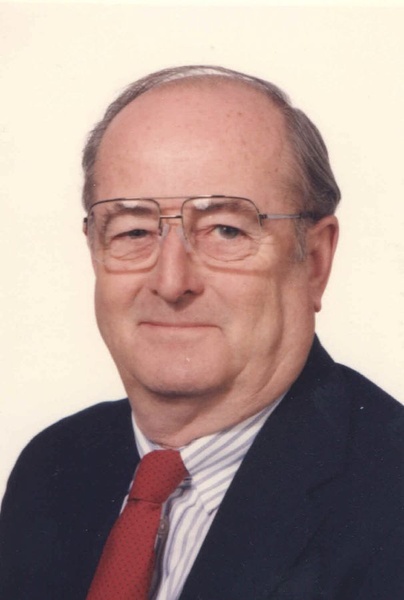 He attended Local School #5, (Meagher), Myron J. Michael Junior High School and Kingston High School. Following high school graduation, he enlisted in the United States Marine Corps. The Corps assigned him to the University of Rochester Officer Candidate School in 1942. Following this assignment, he was sent to San Diego for field training and then shipped overseas. He served for 26 months during WWII in the South Pacific, Pacific and Chinese Theaters of War, was awarded 3 combat battle stars and a Presidential Unit Citation for his participation against enemy forces. Upon discharge from the Marine Corps, he joined IBM. He went on to manage sales offices for Pitney Bowes in Worcester, MA; Denver, CO; White Plains, NY; Bronx, NY.
Returning to Kingston in 1975, he began a second career in real estate. In 1988 he and his son, Joseph, formed a partnership concentrating in commercial development and brokerage. Their partnership has included housing subdivisions, design-build commercial projects, as well as commercial restoration projects in the Mid-Hudson Valley. He retired in 2009.

Entrusted to the care of Keyser Funeral & Cremation Service, 326 Albany Avenue, Kingston, NY, family and friends may visit on Friday, February 5, 2021 from 3pm to 7pm. If you would like to attend, please reserve your space here: https://app.planhero.com/gatherings/7975-john-jack-deegan-visitation Covid-19 protocols, please. A Mass of Christian Burial will be celebrated at St. Joseph's RC Church, 242 Wall Street, Kingston, NY, on Saturday, February 6, 2021 at 10am. Burial will follow in Hurley Cemetery, 69-91 Zandhoek Road, Hurley, NY.

To order memorial trees or send flowers to the family in memory of John "Jack" Deegan, please visit our flower store.