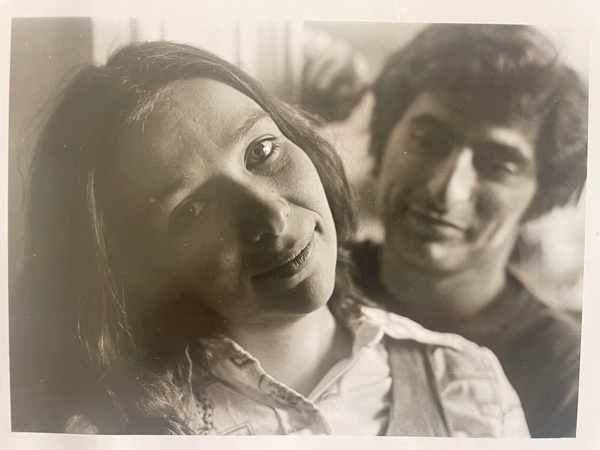 Joan Shulman was born on November 12, 1949, the daughter of Harry and Edith Shulman, and
baby sister to Susie. The ultimate Brooklyn girl, she grew up in an apartment on Coney Island
Avenue, where she lived until her graduation from Lafayette High School in 1967.

The NY Catskills always held a special place in Joan’s life, as her father worked in the Borscht
Belt hotels, and she spent many childhood summers in the region. Later in life she would
impress her children with stories of meeting Bob Dylan in Woodstock in the summer of 1969. In
February 1971, back in New York City, Joan met Alan Samalin through a group of artist friends.
They would be married at City Hall on June 18, 1976. Joan and Alan lived together in Brooklyn,
raising two children. They left the city and moved to West Shokan in the Catskills region
permanently in 2017.

Joan earned her art degree from The City College of New York where she studied ceramics with
Paul Chaleff and Walter Yovaish. She went on to study ceramic sculpture at West Dean
University through the Society of Education Through Art with Karen Karnes, Paulus Berensohn,
and British sculptor, Dan Jelly. Soon after college, Joan established Stepping Stone Pottery,
studio, school and gallery in Cobble Hill, Brooklyn, where she taught adult classes, and
exhibited her work.

Through a grant from the New York Foundation for the Arts, Joan became an Artist in
Residence in the NYC Public Schools. Working with elementary age students from PS 189 in
Manhattan, she created a ceramic mural in the school lobby representing the International Year
of the Child. During this time, she also gave hands on workshops to principals and teachers on
the benefits of exploring clay in a multicultural classroom. Joan was encouraged to continue
working in the NYC Public Schools where she had a long and rewarding career in education,
expanding to ESL and Reading Recovery. She earned a masters in education from Adelphi
University in 1994.

Joan continued to deepen her ceramics practice during her teaching career, attending
workshops and experimenting with new techniques. She discovered Japanese wood firing, and
became a devoted practitioner of this beautiful and labor-intensive form, traveling regularly from
NYC to Cold Spring and elsewhere, staying up all night to stoke the anagama (wood-fired kiln)
with fellow potters. After moving upstate, Joan committed herself full-time to her art, building a
home studio and deepening her involvement with the local ceramics community. In the weeks
before her passing, Joan co-organized a well-attended pottery show, Hudson Valley Women
Who Woodfire, featuring the work of a dozen or so ceramicists across three studio locations.

Joan is survived by her husband, Alan Samalin, her daughter Danielle (Max), son Zachary
(Sonali), and her three grandchildren, Xavier (13), Kai (10), and Niloufer (3). She is also
survived by in laws, nieces, nephews, and so many others whose lives she influenced and who
will love and miss her forever.

The family will be planning a memorial celebration of Joan’s life later in the fall. In lieu of flowers,
we are collecting donations for the National Ovarian Cancer Coalition, to support research into
early detection and screening (follow link below):

To order memorial trees or send flowers to the family in memory of Joanne Shulman, please visit our flower store.