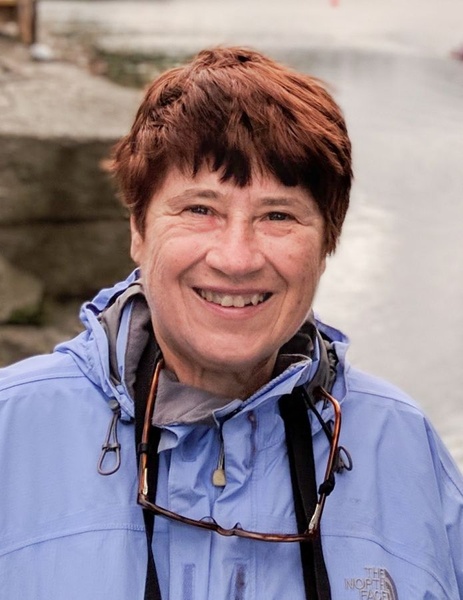 It was a Monday in November of 1948 when Jacquelyn Jane Helmer was born to William and Betty Elliott. Specifically, 11/29/1948, in Margaretville, NY, where she would ignite her spark for life.

She would share a tune during her times with both The Mid-Hudson Women's Chorus, and the Sea Shanty Singers. Just ask Barbara Wild, her voice coach, about her love of music. Or ask her husband, John. They met when she picked up his guitar, and started to sing.

She would go on to fall in love with John Benjamin Helmer, and his own love of music. On a Wednesday in August, (8/13/1980) they would be married.

Earlier, graduating from both Margaretville HS and Ulster County Community College was just the beginning for Jacque. She would set off on a life long voyage of learning. Whether she was on the deck of the Half Moon, where she sailed as crew, learning the chords of the piano with Lonnie Kulick, or the languages of the French and Germans, she was always learning. Only this year, she had been planning a trip back to Quebec, where she could speak with the locals, both learning about strangers (one of her great passions), and improving her technique.

Jacquelyn would not just learn for herself. She was passionate about sharing with others. For many years, she was a Creative Memories Consultant, inviting people into her home to help them preserve and document their photos. As her sons grew, she became a Cub Scout Den Mother in Port Ewen's Troop 26.

As much in love with the earth as the people in it, Jacque had a love for all of God's living things. If you asked The Red Hook Garden Club, The Reformed Church of Port Ewen, or just her neighbors, they could attest to her green thumb. She loved plants, and already had new seedlings growing for the coming season.

We write to inform you not only that Jacquelyn Jane Helmer, of Kingston, NY, passed away Wednesday, February 5, 2020, but that for 71 wonderful years, she lived. Her family is not only in mourning, but also in celebration, because for so many years, when she entered the room, it was no longer empty.

When she entered the room, it was full.

She is survived by her husband, John Helmer, and her son Daniel Helmer, both of Esopus, as well as her son, Benjamin Helmer of Queens. Her surviving family includes her mother, Betty Elliott of New Kingston, her siblings (& spouses), Marjorie (Bill) Trelease of Delhi, Sally (Roy) Scrimshaw of Delhi, Mary (Lowell) McCormick of Ponchatoula LA, James (Andrea) Elliott of New Kingston, Lynn Elliott of Bovina, former exchange student and honorary family member Simon Bauer of Germany, and several nieces and nephews.

Join us at Keyser Funeral Home, (216 Broadway, Port Ewen, NY 12466) on Wednesday from 4pm to 7pm, and share with us what she meant to you. Thursday morning, the funeral procession will form at 9:45am & proceed to the Reformed Church of Port Ewen (160 Salem St, Port Ewen, NY 12466), for the 11am funeral service. Burial will follow in St. Remy Cemetery, St. Remy, NY, near their home.

For those who wish, contributions in Jacquelyn's memory may be made to the Port Ewen Reformed Church, PO Box 580, Port Ewen, NY 12466 or The Red Hook Garden Club, 126 Old Post Road North, Upper Red Hook, NY, 12571. A tribute for Jacquelyn can be found at: KeyserFuneralService.com, where you may leave memories & expressions of sympathy for her family.

To order memorial trees or send flowers to the family in memory of Jacquelyn Helmer, please visit our flower store.