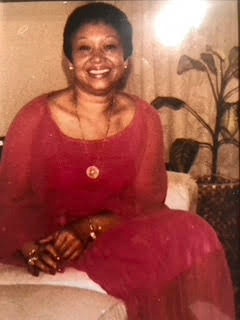 Ivy Winifred Young-Scott, age 91, formerly of Kingston, NY, transitioned on Friday, February 25th, 2022 at Westchester Medical Center. Ivy was born in her home in Swift River, Portland, Jamaica (West Indies) on March 26th, 1930 to Lila Bradshaw and George Young. As a young girl, Ivy spent time playing in the country with her cousins, attending school, and hanging out at her father's restaurant, Young's Kitchenette.

In her teens, Ivy fell in love with Roy Scott and the two married in 1946. The same year, her first child, Ilona Scott (Leffingwell) was born. In June 1955, Ivy, Roy and their daughter Ilona left Kingston, Jamaica and relocated to London, UK. While in London, Ivy worked as a secretary and the Scott's purchased their first home. Brigitte and Rosale were born in London during this time.

In the 1960's Ivy and the family moved to New York City to be closer to Ivy's mother.
Ivy lived in New York City for 30 years. While in New York, Ivy lived in the Bronx and Brooklyn. Ivy worked at ABC News as an assistant to the post-production department and was eventually promoted to become the Administrative Assistant to the Executive Director.

Ivy was a natural born traveler. She loved to travel with friends and family. She loved to take cruises to the Caribbean. Her favorite places to visit included Las Vegas, Hawaii, France, London, Korea, Panama, and Jamaica. These trips allowed her stories to fill the room with adventures of the people, places, and foods she discovered.

For the last 25 years, Ivy resided in Kingston, NY where she was a beloved community member. On Sunday morning's Ivy could be found at St John's Episcopal Church wearing one of her legendary "church hats". She looked forward to coffee time and church functions so that she could fraternize with the people she worshied with.

To order memorial trees or send flowers to the family in memory of Ivy Young-Scott, please visit our flower store.