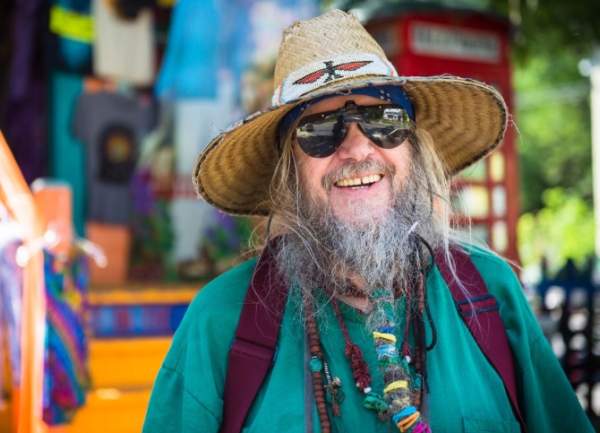 He Who Stands Firm (Nicholas A. Shoumatoff)

He Who Stands Firm, museum curator, lecturer, naturalist, artist, linguist and ethnographer, passed away on September 11, 2018 at his home in Mount Tremper, New York. Known for his extensive knowledge of the Delaware Lenape indian culture and lore, he established the Delaware Indian Resource Center in 1976 at the Trailside Nature Museum at the Westchester County Park, the Ward Pound Ridge Reservation, where he served as curator for fifteen years from the early seventies until the mid-eighties.

"He greatly expanded programming, developed a huge following, enlarged the museum, added a library and organized archaeological digs and ethnographic expeditions," said Beth Herr, one of the succeeding curators of the museum. He also received two federal grants for Delaware Lenape tribal elders from Dewey, Oklahoma to revisit the area of their ancestors for which he received the name, He Who Stands Firm from Touching Leaves, one of the last speakers of the Lenape Munsee language.

He studied with renowned archaeologist Lou Brennan and wrote his thesis on Bear Rock, an important Native American site, for his undergraduate degree from Empire State College . He led some of the earliest ethnobotany programs at the New York Botanical Garden as well as at Fairfield and Bridgeport University.

He Who Stands Firm (Nicholas A. Shoumatoff) graduated from St. Pauls School in Concord, New Hampshire. He attended Stanford University in Palo Alto, CA and Oxford University in England where he studied Chinese. At Pembroke College he lived in the same building with Chögyam Trungpa Rinpoche whom he befriended, continuing his life-long interest in Buddhism. He later helped the first Kagyu lamas to move into the area, first in Putnam County and then in Woodstock. He also organized the first Vajra crown ceremony for His Holiness 16th Karmapa at the Bedford Hills Community House.

Shoumatoff, known as He Who, also worked for the New York State park system, at Fahnstock and Mills Norrie State Park where he created interpretive trail mapping.

Among He Who's relatives are Elizabeth Shoumatoff, painter of the renowned unfinished portrait of Franklin Delano Roosevelt, his great uncle, Andrey Avinoff, Director of the Carnegie Museum of Natural History, and his father Nicholas Shoumatoff, author of books on Central Asia and Switzerland.

Surviving relatives include nature journalist and author, Alex Shoumatoff, and Tonia Shoumatoff, of the Millbrook Independent and former host of Planet Blue at WVKR at Vassar College and Victoria Ward, artist in Glen Cove, along with six nieces and nephews. Memorial arrangements will take place at the Trailside Nature Museum on October 14th at 2 p.m.

To order memorial trees or send flowers to the family in memory of He Who Stands Firm (Nicholas A. Shoumatoff), please visit our flower store.