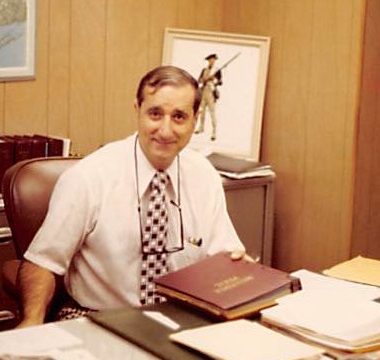 Frank L Casciaro Sr. passed away peacefully at his Kingston home on July 1st, 2017. He was born December 7, 1922 in Carona, Kansas to the late Luigi and Rose Gagliardi Casciaro. He was the husband of the late Gloria Pagliaro Casciaro to whom he was married for 42 years. Gloria died on June 13, 1996.

Frank was a graduate of Mineral High School, Carona, Kansas and earned his Bachelors of Science from Pittsburgh State University, Kansas

Mr. Casciaro served in the US Navy during WW II and Korean Wars; he was a Pharmacist mate 1st Class.

He started in the insurance business, working for Metropolitan Life and then for the Roland A. Augustine agency.

In 1977 with his wife Gloria, they opened the N.E. Insurance Agency. His sons came into the business in the mid-eighties and the agency has now become the Reis Insurance Group. Frank was very active in the community. He was parishioner of St. Mary's RC Church, was an avid hunter and fisherman, served on the board of the Federated Sportsmen's Club, life member of the Lake Katrine Rod and Gun Club, served on the City of Kingston Planning Board and was a Police Commissioner. He had been active in the Republican Party, had been a member of the Exchange Club of Kingston, coached in the Kingston American Little League and was a basketball coach with St. Mary's CYO basketball, with his teams going on to win state tournaments.

Entrusted to the care of the Keyser Funeral & Cremation Service, 326 Albany Avenue, Kingston.

The family will receive their friends from 3 - 7 pm on Thursday July 6th.

A mass of Christian Burial will be celebrated at St. Mary's RC Church, 166 Broadway, Kingston, on Friday at 10 am. Burial in St. Mary's Cemetery, with military honors.

Light a candle in memory of Frank at www.KeyserCarr.com .

To order memorial trees or send flowers to the family in memory of Frank L Casciaro, Sr., please visit our flower store.