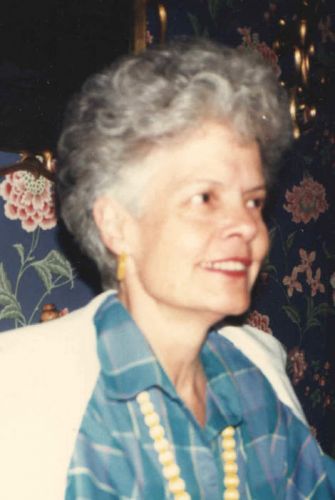 Elizabeth Ward Harrison, 88, known as ”Betty” by her friends and family, passed away Friday, November 10, 2017 at Golden Hill Health Care Center in Kingston, NY with dear family friend, Jim McElrath by her side. Betty was born on November 23, 1928, at home on the family’s Ayrshire Dairy Cattle farm in Meredith, a hamlet outside of Delhi, NY. She was the only child and daughter of Carlton and Helen McPhail Ward. Betty started her life out on the family farm where she would run across the field at the age of four to visit her first friend, Clara Holcolm Stewart. Betty was initially schooled in a one room schoolhouse before moving with her parents to Delaware Avenue in Delhi. At that time, her half-brother Milton Ward (JP) took over running the family farm. In Delhi, she started school at Delaware Academy where she met her new schoolmates and lifelong friends Betty Hymers Douglas and Patsy Whitlock Trifoso. She graduated from Delaware Academy in 1946. She then studied Merchandising at Russell Sage College in Troy, NY. It was at RSC that she met her roommates and lifelong friends Jeanne Randall Mader; Betty Stevens Ford and Audrey Carlson Hunt. It was on the streets of Troy that Betty met an RPI ’51 Engineering student named Albert R Harrison who was selling booster buttons for the lacrosse team. This meeting led to dating and a marriage proposal on her birthday. Betty graduated from Russell Sage College, Troy, NY, in 1950, and worked for two years as assistant to the owner of a fur and specialty store in Albany.

Al and Betty were joined in marriage at the First Baptist Church in Delhi on May 10, 1952. Following Al’s graduation, he accepted a position with Sylvania Corp as an engineer within their Military Products Division in Snyder, NY. Betty joined Al in Snyder where they had their first apartment as husband and wife. She worked in banking during their two years in Snyder before they moved to Poughkeepsie where Al would begin his 36-year career with IBM. In 1955, they were excited to build their first home in Halcyon Park, Lake Katrine beside their dear friends Ferrell (Fink) and Janet McElrath. In 1962 they welcomed their daughter Diane into their family. In 1976, they moved to Woodstock where they would have their beautiful home custom built by Bob Fay. They lived in Woodstock for 30 years before moving to Main Street in Kingston.

Betty was known as an enthusiastic bridge player and a wonderful cook, (despite Al’s many allergies). She was happily devoted to helping and caring for her aging family members and friends and spent many years traveling to the Delhi area to do so. It was because of her excellent care that Al’s life was extended an additional 16 years after his congestive heart failure diagnosis. She was extremely proud to be an RSC alumna and she experienced the rare gift of maintaining close relationships with her dear Delhi and RSC classmates through her lifetime. Betty was a dedicated member of the Kingston Hospital Auxiliary having served as a member of its board. She enjoyed volunteering at Kingston Hospital for over fifty years not only for the friendships developed there, but also for the opportunity to help others. And for several years Betty managed the hospital’s annual geranium sale fundraiser. With Mary Eppard, Betty again exercised her merchandising background to run a successful candy drive for the purchase of new playground equipment at Diane’s elementary school, Lake Katrine Elementary.

Betty and Al were devoted members of the Old Dutch Church for decades since their arrival in the Kingston area. Betty was an active member of the ODC’s Women’s Guild where she had served as co-president.

Betty is survived by her loving daughter, Diane Harrison of Burke, VA. Also left to cherish her memory is special family friend Janie Kirk, of Lewisburg, WV; the McElraths and other dear friends; nieces and nephews. Betty is now home with the Lord and reunited in heaven with Al who passed in 2011, her cherished father and mother (Carlton and Helen Ward); dear brother (Milton Ward); dear aunts (Grace and Margaret McPhail; Ethel McPhail Winsor); and dear friends Betty Ford; Fink and Janet McElrath and Doris Chromy.

During the last three years of her life, Betty was hospitalized multiple times and Diane would like to thank the many friends who lovingly cared and supported her mom as well as for the wonderful care Betty received at Kingston Hospital; Ten Broeck Commons; Hudson Valley Senior Residence and Golden Hill.

Entrusted to the care of A. Carr & Son Funeral Home, 65 Lucas Ave, Kingston. Calling hours will be on Thursday November 16, 2017, from 4pm to 7pm. The service will be on Friday November 17, 2017, at 2pm. Inurnment will take place in the spring at Woodland Cemetery, Delhi. In appreciation of the wonderful Physical Therapy Department at Ten Broeck Commons Nursing Home, memorial donations can be sent to Ten Broeck Commons, 1 Commons Drive, Lake Katrine, NY 12449.

To order memorial trees or send flowers to the family in memory of Elizabeth Ward Harrison, please visit our flower store.