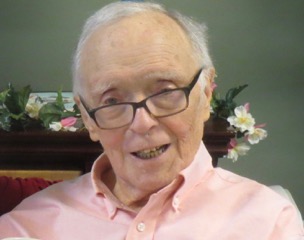 Edward Burns Milhaven, husband, father and grandfather, passed away at age 84 on December 14 at The Baptist Home in Rhinebeck, NY. Born on June 10, 1933 in Queens, NY, he was the son of the late John and Rose Burns Milhaven.

Edward is survived by his wife, Kathleen. The two met while on a double date, each dating a different person, but Ed thought she was the most beautiful woman and knew she was the one for him. After three dates he asked her to marry him. He was a devoted husband, who doted on his wife. He always said that marrying Katie was the best decision he ever made. Ed and Katie were married for 56 years and together had four children: Kathy, John, Ed and Michael.

Edward was happiest spending time with his family and his family was the most important thing in his life. This showed in both the big and little things he did for them; driving his children to and from various events, whether just across town or across the state. From concerts to parades, practices and performances he tried to never miss a moment of their lives. When his children were grown and no longer at home, he would call them on the phone, checking in to see how they were doing.

Edward was a man of sharp intelligence and wit. After graduating from Xavier High School in New York City he entered the Jesuit Seminary at St. Andrew's on the Hudson in Hyde Park. He studied to become a priest for six years but decided that wasn't his calling.

He received his degree in physics from Fordham University and worked in the Social Security Administration and taught math in New York City before joining IBM Poughkeepsie in 1963. At IBM, he worked in a variety of positions before retiring in 1993.

He was also kind and generous and quick to help anyone who needed it. He volunteered for the Boy Scouts and also served on the Board of Trustees at Poughkeepsie Day School.

In addition to his wife and children, Edward is also survived by his sister, Sister Regis Milhaven who lives in Amityville. His brother, John Giles Milhaven, passed away in 2004. Edward is also grandfather to Mark, Jason, Jack, Abbey and Sam and he has numerous nieces and nephews.

Arrangements are under the direction of Keyser Funeral & Cremation Service, Port Ewen. A Mass of Christian Burial will be celebrated at Presentation of the Blessed Virgin Mary Church in Port Ewen, NY on December 21, 2017 at 10am. In lieu of flowers, donations can be made in his name to The Parkinson's Foundation.

To order memorial trees or send flowers to the family in memory of Edward Burns Milhaven, please visit our flower store.