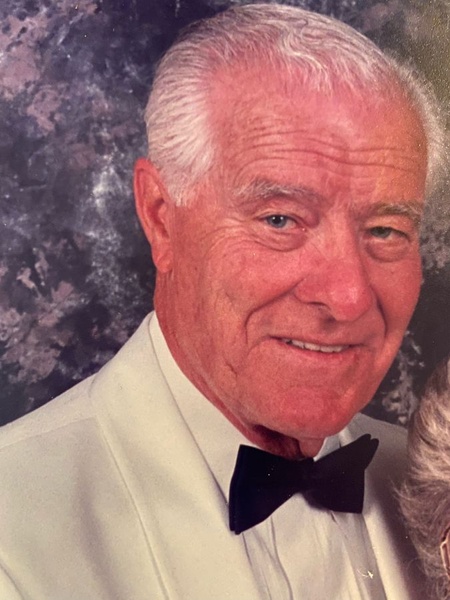 Donald Schoonmaker Oakley, born July 5, 1921, passed away peacefully on July 12, 2021 surrounded by his loving family. He was 100 years young. Donald grew up in Stone Ridge and was a lifelong resident of Ulster County. He resided in Hurley and wintered in Florida.

A proud Veteran, Donald served in the United States Army Air Core during WWII as an expert radio operator. Selected for a special mission, Donald survived an emergency landing and was MIA for weeks in enemy territory. After an incredible and harrowing journey, Donald eventually made his way to allied territory thanks to the "partisans" who aided him along the way.

Donald married Darlene Jones, the love of his life on June 5, 1944; they remained happily married for 61 years. Donald was the proud founder of Colonial Roofing, serving as president until his retirement and final ladder climb at 90 years old. He also founded Kingston Weather Chex Insulation, Alco Awning, and Wicks and Sticks. Donald loved gardening, especially cultivating his roses. He enjoyed playing golf and the family card game Skat. Donald and Darlene were avid travelers, leaving few stones unturned. They traveled across the
United States, Canada, Europe, Israel and more. Donald believed in the binding power of a hand shake, minding the time, and a stiff Manhattan.

Entrusted to the care of Keyser Funeral & Cremation Service, Inc., 326 Albany Avenue, Kingston, NY 12401 where family and friends may visit on Friday July 16, 2021 from 10am to 12pm followed by a funeral service at Fair Street Reformed Church, 209 Fair St., Kingston, NY, 12401 at 1pm. Burial will then take place at Hurley Cemetery, Hurley, NY. Due to church capacity rules, attendance may be limited. In lieu of flowers, donations can be made to the local VFW or the SPCA in the honor of Donald Oakley. A tribute for Donald can be found at www.KeyserFuneralService.com , where you may leave memories and expressions of sympathy for his family.

To order memorial trees or send flowers to the family in memory of Donald Schoonmaker Oakley, please visit our flower store.