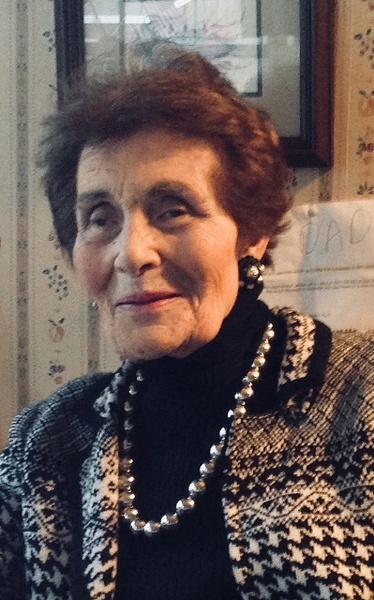 Charlotte Gill, 91, of Hurley, passed away peacefully at her home on Hurley Mountain Road of natural causes on Friday, June 29th.
Born in October 1926, to the late Ralph and Charlotte "Lottie" Cooper, Charlotte grew up on Manor Avenue in Kingston. She attended Kingston High School graduating at the age of sixteen. While a junior at KHS, her friend Isabelle Gill offered her a ride home from an evening's choir practice. That was when she met Jack A. Gill. Later that night, the fifteen-year old Charlotte announced to her mother that she had met "the man she would marry." Charlotte graduated from Cornell University three years later at the age of 19, majoring in Home Economics. After graduation, she began working for Central Hudson in Poughkeepsie as a Home Economist.
When Jack returned from his military service in the Pacific as a decorated Marine in World War II, the couple resumed their courtship and married on October 15, 1949. They worked hard as a team to build Gill Corn Farms into a successful enterprise. While her husband was in the fields, Charlotte managed the books, and in 1970, recognizing that neighbors were asking to buy sweetcorn, she placed a small picnic table in front of their home with a sign that said, "Honk for Service." An astute businesswoman, she grew the retail business every year and eventually created road stands in two locations (Hurley Mountain Road and Route 209) that sold an array of retail and wholesale vegetables to restaurants and other farm stands as far away as NYC. Although the farm and family were her main focus, Charlotte was active in community activities: The Junior League of Kingston, PEO and several bridge clubs filled her social calendar in the fall and winter when the farm work slowed. She was also a lifelong member of the Hurley Reformed Church.
Charlotte is predeceased by her husband Jack Gill, who passed away in December 2014 and a son, David Gill who passed away suddenly of a heart attack in June 2017. Charlotte is survived by her children: Cynthia Lapp and her husband Arthur Lapp of Hurley; Karen Gill and her husband Frank Spinelli of Glenford; and John Gill and his wife, Loretta, of Hurley; and several grandchildren including Michael and Julie Arnold. She is also survived by her brother, Robert Cooper, 87, and his wife Jackie, and their daughters Jill and Lisa of San Diego, CA. Charlotte will be greatly missed by her family. A church service will be held in her honor at the Hurley Reformed Church on Main Street in Hurley on Tuesday, July 3rd at 10am with burial in the Hurley Cemetery immediately following.
The family suggests memorial contributions to Hurley Fire Department, 135 Old Route 209, Hurley, NY 12443
Please share a memory at www.Carrfh.com Arrangements entrusted to A. Carr & Son Funeral Home, 65 Lucas Ave, Kingston, NY 12401.

To order memorial trees or send flowers to the family in memory of Charlotte Gill, please visit our flower store.