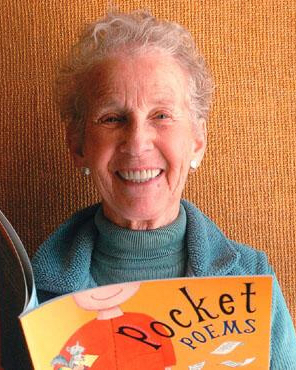 Bobbi Katz left us on December 3, 2022. Born to George and Margaret Shapiro on May 2, 1933 in Newburgh, New York, Bobbi is survived by her daughter Lori Katz, who was at her side at the end. Bobbi was predeceased by her son Joshua.

A lover of art, the natural world, history and cultures, she made her mark in life as a writer of poetry, biographies, essays and picture books. Some of her poems have been parts of so many anthologies and popular publications that they are mistaken as belonging in the public domain. In addressing her younger audiences, Bobbi had this to say about being a writer: “There is nothing better than finding just the right words to make a new connection between ideas and images. It’s super delicious to share that connection with readers."

A prolific author, over 95 of her books were published under her name including Trailblazers: Poems of Exploration, Once Around the Sun, We, the People and A Rumpus of Rhymes, which received the National Council of Teachers of English Notable Book designation in 2001. Bobbi ghost wrote several well-known children’s books’ series that are still popular today. One could not have a conversation with her without the start of a poem appearing at some point. She was a keen observer of life and had a passion for justice in all its forms. Bobbi lived her values and shared them through her written words.

A Phi Beta Kappa honors graduate of Goucher College, Bobbi studied art history, specializing in rare illustrated books. She later attended Hebrew University. A passionate life-long environmentalist, civil rights, and peace activist, she has also worked as an art historian, a fashion editor, a social worker, the host of "Art in Action” - a radio talk show, the program director of a community arts council, a contributing author to the Cousteau Society's Environmental Almanac, and Random House editor of educational books as well as children's books. When she took ill, Bobbi was readying for publication a collection of her “Old Woman” poems for adult readers.

Born into the Jewish faith, she was a long time member of both the Woodstock Jewish Congregation and the Unitarian Universalist Congregation of the Catskills, and referred to herself as a “Jewnitarian”. While her unexpected illness came on with a vengeance, Bobbi often talked about her life as being well-lived, and was not afraid of death.

Bobbi chose a Natural Burial site at Rosendale Plains Cemetery, in Tillson, NY. A Celebration of Life is planned for her 90th birthday and will take place in the Memorial Garden at the Unitarian Universalist Congregation of the Catskills in Kingston NY in May. Contributions in her name can be sent to Doctors Without Borders.

To order memorial trees or send flowers to the family in memory of Bobbi Katz, please visit our flower store.