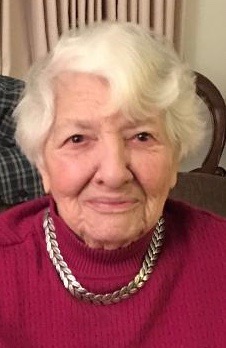 Bea's family came to the States fleeing the Armenian genocide which began in 1915. Bea survived two brothers. Her first brother died when he was only two weeks old. She was close to her brother Reupen, who was born in 1912 and passed away in 1977. In 1974 Bea lost her first husband Gregory Keyan to whom she was married for 31 years. In 1980 she married her second husband, Father John F. Moore, an Episcopal priest, who died in 1982. When she was in her 20's she lost her very dear uncle Nazareth Gullian.

During her long life Bea touched many with her care and compassion. Those who knew her always found her door and her heart open. She remained grateful for her many cherished and faithful friends, whom she treasured as the true riches of her life. Bea and her family were members of the Church of the Ascension, West Park, for many years and in the last decade of her life she chose to make Holy Cross/Santa Cruz Episcopal Church in Kingston her faith home. She remained an active and devoted member of the parish until her death. For many years, Bea was also a supporting patron of the Klyne Esopus Museum.

A Mass of the Resurrection will be celebrated at Holy Cross/Santa Cruz Episcopal Church, on Saturday, September 7th, at 9:30 AM. The wake will be at the Church on Friday, September 6th. Calling hours will be from 2pm to 5pm and from 6pm to 9pm. Burial will be at Fairview Cemetery in Fairview, NJ. Burial will be private. In lieu of flowers donations can be made to: Holy Cross/Santa Cruz Episcopal Church, 30 Pine Grove Avenue, Kingston, NY 12401 Or The Klyne Esopus Museum
P.O. Box 751, Port Ewen, NY 12466. To leave an expression of sympathy, please visit www.CarrFH.com .

To order memorial trees or send flowers to the family in memory of Beatrice Gullian Keyan Moore, please visit our flower store.